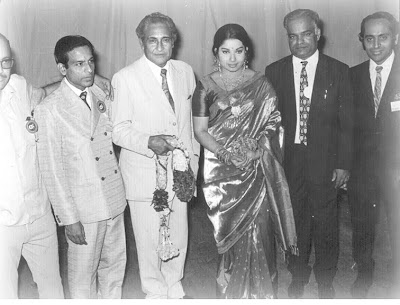 me (extreme right) in 70s
One more interesting contribution from Ms.Sivapriyakrishnan which will take many of us back to 70s

People who grew up during the 70s and well early eighties in middle class India ....

1 Though you may not publicly own to this, at the age of 5-8 years, you were very proud of your first “Bellbottom” or your first “Maxi”

2 Phantom & Mandrake were your only true heroes. You can also nod your heads to names like Chandamama, Champak, Lot-Pot, Nandan. The brainy ones read “Competition Success Review”.

3 You took pride in turning to the back page of your latest Amar Chitra Katha and ticking off yet another title. How many ever you ticked, you still had many to go.

4 Your “Camlin” geometry box & Flora pencil was your prized possession.

5 The only “Holidays” you took were to go to your grandparents’ or your cousins’ houses.

6 Ice-cream meant only - either an orange stick, a vanilla softy in a cone or at most – a Choco Bar if you lived in a swanky town. Coke was an immense luxury, followed by Thums Up !!

7 Your first family car ( and the only one) was a Fiat. Or an ambassador. This often had to be pushed by the entire family to get going.

8 The glass windows in the back seats used to get stuck at the two-thirds down level and used to irk the shit out of you! The window went down only if your puny arm could manage the tacky rotary handle to pull it down. Locking the door was easy. You just whacked the other tacky, non-rotary handle downwards.

9 Your mom had stitched the weirdest lace curtains for all the windows of the car. They were tied in the middle and if your dad was the comfort-oriented kinds, you had a magnificent small fan upfront, below which screwed to the board was the cassette player.

10 Your parents were proud owners of HMT watches. You “earned” yours after 8th or the 10th standard exams.

11 You have been to “Jumbo Circus” ; have held your breath while the pretty young thing in the glittery skirt did acrobatics, quite enjoyed the elephants hitting football, the motorcyclist vrooming in the “Maut ka Gola” and it was politically okay to laugh your guts out at dwarfs hitting each others bottoms!

12 You have atleast once heard “Hawa Mahal” on the radio.

13 If you had a TV, it was normal to expect the neighborhood to gather around to watch the Chitrahaar or the Sunday movie. If you didn’t have a TV, you just went to a house that did. It mattered little if you knew the owners or not.

14 Sometimes the owners of these TVs got very creative and got a bi or even a tri-coloured anti-glare screen which they attached with two side clips onto their Weston TVs. That confused the hell out of you!

15 Black & White TVs weren’t so bad after all because cricket was played in whites.

16 You thought your Dad rocked because you got your own ( the family’s; not your own own!) colour TV when the Asian Games started. Everyone else got the same idea as well and ever since, no one came over to your house and you didn’t go to anyone else’s.

17 You dreaded the death of any political leader because of the mourning they would announce on the TV. After all how much “Shashtriya Sangeet” can a kid take? Salma Sultana didn’t smile either during the mourning.

18 You knew that “Indira Gandhi” was somebody really powerful and terribly important. And that’s all you needed to know.

19 The only “Gadgets” in the house were the TV, the Fridge and the Mixie.

20 All the gadgets had to be duly covered with a crochet covers and sometimes even with ingenious, custom-fit plastic covers.

21 Movies meant Amitabh Bachchan. Before the start of the movie you always had to watch the obligatory “newsreel”.

23 You had a turntable “stereo” and a collection of LP Records. Your hormones went crazy when you bought “Disco Deewane” by Naziya Hassan & Zoheb Hassan.

24 You couldn’t contain your happiness when you suddenly had knowledge of Grammy awards and Tina Turner, Cyndi Lauper & OMG even Michael Jackson became familiar names.

25 School teachers, your parents and even your neighbours could whack you and it was all okay.

26 Photograph taking was a big thing. You were lucky if your family owned a camera. A reel of 36 exposures was valuable hence it justified the half hour preparation & “setting” & the “posing” for each picture. Therefore, you have atleast one family picture where everyone is holding their breath and standing at attention!

27. When you really counted down days to "Diwali" every year.

innocence was natural,
when getting high meant on a swing
when drinking meant rasna
when dad was the only hero , when love was mom's hug      When dad's shoulders was the highest place on earth,
when worst enemies were your siblings,  when the only thing that could hurt were bleeding knees,
when the only things broken were toys,  and when goodbyes only meant till tomorrow.....
life has changed quite a bit since then......
Many more nostalgic memories hidden there….get them out!
The photo on the top is one I got out

And the ever enchanting vivid barathi,with mohamed rafi ,latha and all ,even though we do not know Hindi.

How true. Wonderful were those days.Now we have too much of everything but very little time to enjoy anything at leisure.

it only makes us so sad of an era long faded out .....haunting memories not possible to experiance any longer