Is not India shining? 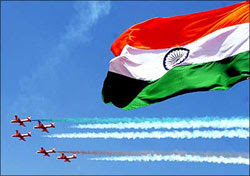 India ranks second worldwide among businessmen on the trade confidence level after the recent global financial crisis, a survey has said.
The country, with 133 points, ranks next to United Arab Emirates [ Images ] (134 points) on the global trade confidence level index, according to the survey conducted by Hongkong Shanghai Banking Corporation (HSBC).
Vietnam, with 132 points and Brazil [ Images ] with 129, are third and fourth respectively. France [ Images ], with 95 points, was 17th and last in the index, with a very low confidence level, HSBC India [ Images ] trade and supply chain head Bhriguraj Singh said in New Delhi [ Images ] on Tuesday.
He said the survey had found that some markets, including Asia Pacific region, Latin America, Canada [ Images ] and Europe were in positive territory after the financial crisis.
A total of 5,120 small and medium exporters globally were respondents for the findings and were asked for their outlook for the next six months, he said.
He said emerging economies topped the index with 122 points against 106 points for developed markets.
Stating that the confidence level among Indian exporters remained upbeat, he said trade confidence in India grew to 133 points from 117 in the second half of 2009, which reeled under the impact of the global financial crisis.
Giving statistics, he said exports were around $12.4 billion in January 2009, but rose to $14.3 billion in January 2010.
Similarly, exports in February 2010 also increased to $16.1 billion from $11.09 billion in February 2009.
Exports in 2008-09 stood at $162 billion and marginally increased to $164 billion in 2009-10, he said.
He said the survey had found that 60 per cent of Indian exporters expect finance from banks to increase in the next six months, while 59 per cent are confident of having access to finance through banks.
Posted by hvaidya at 7:55 PM

Labels: Is not India shining ?