What is secularism and Art?

Here is an interesting mail forwarded by Bhaskaran Sivaraman " a letter addressed to Mr. Ram of The Hindu which is yet to be published in "The Hindu" ( I was told that this mail is in circulation in internet now) 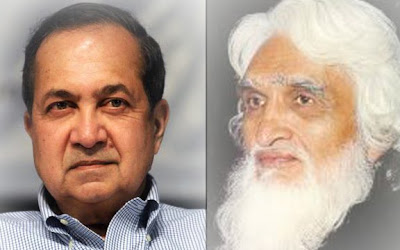 This is a Letter to the Editor of The Hindu, from a practising Christian lady who was Professor in Stella Maris College, Chennai till recently; now settled at Baroda, regarding an Edit in The Hindu in favour of bringing back MF Hussain to India.

I have taken time to write this to you Ram-for the simple reason that we have known you for so many years- you and The Hindu bring back happy memories Please take what I am putting down as those that come from an agonized soul. You know that I do not mince words and what I have to say I will-I call a spade a spade-now it is too late for me to learn the tricks of being called a secularist if that means a bias for, one, and a bias against, another.

Hussain is now a citizen of Qatar-this has generated enough of heat and less of light. Qatar you know better than me is not a country which respects democracy or freedom of expression. Hussain says he has complete freedom-I challenge him to paint a picture of Mohammed fully clad.

There is no second opinion that artists have the Right of Freedom of expression. Is such a right restricted only to Hussain? Will that right not flow to Dan Brown-why was his film-Da Vinci Code not screened? Why was Satanic Verses banned-does Salman Rushdie not have that freedom of expression? Similarly why is Taslima hunted and hounded and why fatwas have been issued on both these writers? Why has Qatar not offered citizenship to Taslima? In the present rioting in Shimoga in Karnataka against the article Taslima wrote against the tradition of burqua which appeared in the Out Look in Jan 2007.No body protested then either in Delhi or in any other part of the country; now when it reappears in a Karnataka paper there is rioting. Is there a political agenda to create a problem in Karnataka by the intolerant goons? Why has the media not condemned this insensitivity and intolerance of the Muslims against Taslimas views? When it comes to the Sangh Parivar it is quick to call them goons and intolerant etc. Now who are the goons and where is this tolerance and sensitivity?

Regarding Hussains artistic freedom it seems to run unfettered in an expression of sexual perversion only when he envisages the Hindu Gods and Goddesses. There is no quarrel had he painted a nude woman sitting on the tail of a monkey. The point is he captioned it as Sita. Nobody would have protested against the sexual perversion and his orientatation to sexual signs and symbols. But would he dare to caption it as Fatima enjoying in Jannat with animals?

Next example-is the painting of Saraswati copulating with a lion. Here again his perversion is evident and so is his intent. Even that lets concede cannot be faulted-each ones sexual orientation is each ones business I suppose. But he captioned it as Saraswati. This is the problem. It is Hussains business to enjoy in painting his sexual perversion. But why use Saraswati and Sita for his perverted expressions? Use Fatima and watch the consequence. Let the media people come to his rescue then. Now that he is in a country that gives him complete freedom let him go ahead and paint Fatima copulating with a lion or any other animal of his choice. And then turn around and prove to India-the Freedom of expression he enjoys in Qatar.

It brings back to my mind an episode that happened to The Hindu some years ago.[1991]. You had a separate weekly page for children with cartoons, quizzes, and with poems and articles of school children. In one such weekly page The Hindu printed a venerable bearded man-fully robed with head dress, mouthing some passages of the Koran-trying to teach children .It was done not only in good faith but as a part of inculcating values to children from the Koran. All hell broke loose. Your office witnessed goons who rushed in-demanded an apology-held out threats. In Ambur,Vaniambadi and Vellore the papers stands were burned-the copies of The Hindu were consigned to the fire. A threat to raise the issue in Parliament through a Private Members Bill was held out-Hectic activities went on-I am not sure of the nature and the machinations behind the scene. But The Hindu next day brought out a public apology in its front page. Where were you Ram? How secular and tolerant were the Muslims?

Well this is of the past-today it is worse because the communal temperature in this country is at a all high-even a small friction can ignite and demolition the countrys peace and harmony. It is against this background that one should view Hussain who is bent on abusing and insulting the Hindu Gods and Goddesses. Respect for religious sentiments, need to maintain peace and harmony should also be part of the agenda of an artist-if he is great. If it is absent then he cannot say that he respects India and express his longing for India.

The issue is just not nudity-Yes the temples-the frescos in Konarak and Kajhuraho have nude figures-But does it say that they are Sita, Sarswati or any goddesses? We have the Yoni and the Phallus as sacred signs of Life-of Siva and Shakthi-take these icons to the streets, paint them -give it a caption it become vulgar. Times have changed. Even granted that our ancients sculptured and painted naked forms and figures, with a pervert mind to demean religion is no license to repeat that in todays changed political and social scenario and is not a sign of secularism and tolerance. I repeat there is no quarrel with nudity-painters have time and again found in it the perfection of Gods hand craft.

Let me wish Hussain peace in Qatar-the totalitarian regime with zero tolerance May be he will convince the regime there to permit freedom of expression in word, writing and painting. For this he could start experimenting painting forms and figure of Mohamed the Prophet-and his family And may I fervently wish that the media-especially The Hindu does not discriminate goons-let it not substitute tolerance for intolerance when it comes to Rahim and Antony and another index for Ram.

I hope you will read this in the same spirit that I have written. All the best to you Ram.
Dr Mrs Hilda Raja, Vadodara
Posted by hvaidya at 8:20 PM

One should have read Mr. Babu Rao Patel's Mother India magazine. He was a MP and he was a fearless writer and he was a nightmare to many ministers. He has touched upon these subjects very often. Sometimes he did use unprintable language but that was to bring home the point with audacity.

I highly doubt whether the Hindu will have guts to publish this.

The hindu has always been anti Hindu. I am sure this will never be published in the Hindu