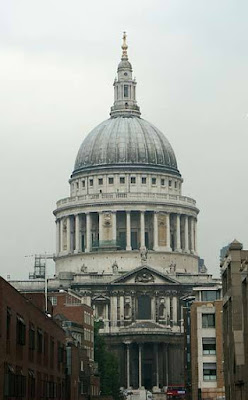 What leadership quality would be at the top of your list? Many might say the ability to see the bigger picture - and rightly so!

The essence of this quality is encapsulated in the classic "stonecutter short-story." There are several versions of the story, and several ways to interpret its timeless lessons. It powerfully illustrates the importance of perception in our approach to work. Whether you think you're just earning a living, doing the best at your job, or you're leaving a legacy, this story demonstrates that there is great value in thinking positively and in seeing the bigger picture.
A second version of the story, adapted from Peter Drucker, suggests that just seeing the bigger picture is not enough. Real leadership quality is demonstrated through both seeing that picture, and through ensuring others see it. By building a shared vision.

Our third version of this story graphically illustrates Peter Senge's ideas on leadership quality - the importance of sharing a vision. We end this article with Charles Handy's wonderful quote about "cathedral thinkers"......

One day a traveller, walking along a lane, came across 3 stonecutters working in a quarry. Each was busy cutting a block of stone. Interested to find out what they were working on, he asked the first stonecutter what he was doing. "I am cutting a stone!" Still no wiser the traveller turned to the second stonecutter and asked him what he was doing. “I am cutting this block of stone to make sure that it’s square, and its dimensions are uniform, so that it will fit exactly in its place in a wall." A bit closer to finding out what the stonecutters were working on but still unclear, the traveller turned to the third stonecutter. He seemed to be the happiest of the three and when asked what he was doing replied: “I am building a cathedral.”
This story beautifully illustrates a key leadership quality - seeing the bigger picture. All three stonecutters were doing the same thing, but each gave a very different answer. Each knew how to do his job but what was it that set the third stonecutter apart? Perhaps:
·  Knowing not just how and what to do, but knowing why.
·  Viewing the whole and not just its parts.
·  Seeing a vision, a sense of the bigger picture.
·  Having the ability to see significance in work, beyond the obvious.
·  Understanding that a legacy will live on, whether in the stone of a cathedral, or in the impact made on other people.

"I am Building a Cathedral"

Demonstrating his own leadership quality, Peter Drucker told a different version of this story, going beyond the obvious in drawing out its lessons.
In Drucker's version, when asked what they were doing, the first stonecutter replied:

The second kept on hammering while he said:

"I am doing the best job of stone cutting in the entire country."

The third stonecutter, when asked the same question said:

"I am building a cathedral."
As with the earlier version, the first stonecutter knew what he wanted to get from his work, and was doing so. He was giving a fair day's work for a fair day's pay. The third stonecutter obviously had a positive attitude to his work, perhaps because he saw the bigger picture. But what about the second stonecutter? Drucker suggested this was a potential problem area, perhaps the opposite of the third stonecutter's view of the bigger picture. Here was someone focusing on his own narrow view of work, possibly to the detriment of the project as a whole. Having a functional or professional view, at the expense of the overall contribution to the organisation.
Perhaps it's worth reflecting on how we see ourselves.

·  Has work become simply a means of earning a living?
·  Are we too focused on our individual performance or achievements?
·  Do we have a sense of the bigger picture in what we do?
Answers to these questions will probably change over time and at different periods of our lives. Perhaps we do just see work as a way to earn a living, because we have more important things in our lives. Or perhaps being expert at what we do is sufficient, and we don't feel the need to engage in the wider picture.

However, we spend much of our lives at work so making that time as fulfilling as possible is worth the effort. There is also considerable evidence that being a rounded, more complex person can make us happier, both at work and in our personal lives. Learning to look beyond the obvious, to see the bigger picture, can be a big step towards that happiness but does leadership require something else?
Did the third stonecutter's reply demonstrate a leadership quality, or just someone happy in his work? Simply having the vision is not enough. Good leaders need the ability to show that vision, to share it, and to inspire others to understand and work towards it. The third stonecutter becomes a leader when his view of his work is shared by his workmates - when none of them says they're simply doing their job.
As Peter Senge has put it: the responsibility of a leader is not just to share a vision but to build a shared vision.

Our final version of the story illustrates Senge's idea of leadership quality. This time the stonecutters are building London's magnificent St Paul's Cathedral, designed by the great British architect and designer, Sir Christopher Wren. In this story the third stonecutter's response does illustrate a leadership quality.....
One day, after work on his cathedral had begun, Wren unrecognised by the workforce, walked among the artisans and stonecutters.

He asked one of the workmen:

“What are you doing?” “I am cutting a piece of stone“, the workman replied.

He asked the same question of the second stonecutter. “I am earning five shillings two pence a day", the second workman replied.

He asked a third workman the same question, and the man answered, “I am helping Sir Christopher Wren build a magnificent cathedral to the glory of God.”
A leadership quality might be seeing the bigger picture, but it's essential to help others share that vision.

"Cathedrals are incredible testaments to human endeavour. It is not only their grandeur or splendour, but the thought that they often took more than fifty years to build. Those who designed them, those who first worked on them, knew for certain that they would never see them finished. They knew only that they were creating something glorious which would stand for centuries, long after their own names had been forgotten.....
We may not need any more cathedrals but we do need cathedral thinkers, people who can think beyond their own lifetimes."

Phil said...
This post has been copied verbatim from our page: Leadership Quality: Seeing the Bigger Picture Would you please either attribute it properly, with a live hyperlink, or remove it from your site. Thank you Phi Higson
June 10, 2011 4:35 PM

hvaidya said...
This article was sent to me by one of the readers of my blog. I am publishing your comment with the link given by you. It was not my intention to avoid or suppress the original contributor" name. I was genuinely not aware of that. Hope publishing your comment is satisfactory to you. If you still want this to be removed, I am prepared to do it.
June 10, 2011 9:34 PM

This post has been copied verbatim from our page:

Would you please either attribute it properly, with a live hyperlink, or remove it from your site.