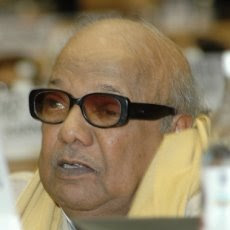 Dr. Kalignar Karunanidhi, the chief Minister of Tamilnadu, does not add any justice to the titles he has, by commenting consistently on individuals faith and beliefs. Every body in a democratic country has got the right to follow certain faiths and if he does not want to follow any of them, he has got the liberty to be so. But, what right, he has got to criticize others in following certain things in which he/she has certain faith?

If he claims that he is trying people to get more "Paguththarivu", let him talk or write poems generally but not specifying a particular attitude of persons, while he is garlanding the statues of Annadurai and Periyar. (I wonder whether there is any "paguththarivu" in gartlanding statues) If you want to talk on a subject either for or against, first you should have a conviction on that subject.

If he thinks having "Vibhoodhi" in forehead and "Poonool" are the cause for the trouble in the town, where the trouble started, is that not nonsense? Because. it was not a clash between brahmins and other communities. If he has stopped with "Viboodhi" alone, we can understand, that he has mentioned about those who has faith in God but fighting. But what made him to mention about sacred thread?

And in both those groups are there not people who use "Viboodhi" when they go to temple and those who do not use that, but use some other religious symbol?

For his age, and for his position he must be more matured! Hope some body from the people surrounding him must be dare enough to tell him this.

I am stopping here because, If I continue to write, I am afraid I may stoop to his level.