Janagana mana instead of Mangalam

T. M. Krishna took his rasikas by surprise once again 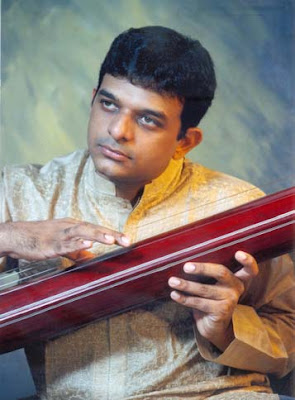 
Well-known vocalist T M Krishna concludes his Carnatic concert with the national anthem, leaving some pleasantly surprised, and some with raised eyebrows
Sanak Kumar Athreya
Posted On Tuesday, April 27, 2010 at 02:49:05 PM
Well-known vocalist T M Krishna has kicked off a debate by singing the national anthem at the end of his concert with some individual ornamentation. While his Saturday concert at Sri Rama Seva Mandali was studded with the usual classical compositions, the concluding piece was completely unexpected.
After requesting everyone to stand up, he broke out into Jana gana mana, singing it with some raga flourishes.

Many opinions came up. Pavan Duggal, Supreme Court advocate, said, Nobody can use the national anthem for commercial benefit. Singing it as an item in a ticketed concert, recording it for a commercial music CD, or making a ringtone is unwelcome.

Two years ago, N R Narayana Murthy, chief mentor of Infosys, was pushed into a controversy for playing an instrumental version of the national anthem.

There are many patriotic songs in the Carnatic music repertoire. The national anthem must be sung on occasions of national importance and not for entertainment, said Raghavan, a Carnatic music aficionado.

At the Saturday concert at Rama Seva Mandali in Chamarajpet, senior citizens were uncomfortable about standing up for the song.

Lawyer Arun Mani quotes the guidelines for playing the national anthem. "It is okay to be seated when the anthem is played as a part of a programme, documentary or movie, but it is important that decorum be maintained," he said.

Legally speaking, if a public interest case is filed against dishonouring the national anthem, the judge would have to estimate the damage and impose a punishment which could be up to three years of imprisonment or a fine or both, said Radha Harihar, corporate lawyer.

The Prevention of Insults to National Honour Act will not apply in this instance, and moreover, the Ministry of Home affairs has left it to the good sense of the people not to indulge in indiscriminate singing or playing of the anthem.

Constitutional expert B V Acharya said not singing the national anthem in the official tune would be `improper,' even if it did may not amount to an offence.

"So long as there is no disrespect shown, singing the national anthem in any context is not an offence. But changing the tune is wrong and not befitting," he said.

When the Vande Mataram tune was changed by A R Rahman, Acharya was upset because he had heard the older tune for a long time.

"Now we are used to the new tune. But when it comes to the national anthem, no one can change the tune," he said.
He conceded Krishna's intention was good, but said he should not set a precedent for others to meddle with the national anthem.

"At the end of each programme a concluding number called the Pavamana is performed. This was the first time the national anthem was sung as the Pavamana. It was the same tune and he did not make any change or leave out anything. The bhaava (emotion) was the same, but he made minor improvisations on the raaga," he told Bangalore Mirror.

He said he was unaware of any law that prohibits the singing of the national anthem at classical concerts. About the style, he said, "In the version recently popularised by A R Rahman, many artists have performed the national anthem, and one can clearly see the artist in each rendition... similarly, I have not altered the tune, but you can find the musician T M Krishna in my rendition."

He said the performance showed his "deep respect" for the national anthem.
Inputs from Bangalore Mirror Bureau
Posted by hvaidya at 12:16 PM 6 comments: