Naalaayira Dhivya Prabhandham is not only famous for its Devotion (Bhakthi), but also for its beautiful Tamil. This was made known to many ordinary people by writer Sujatha. I have taken up this enormous job, and there are possibilities of errors/omissions. Readers are requested to be free in pointing out them, to make this subject, perfect.

The Nalayira Divya Prabandham (Tamil: நாலாயிர திவ்ய பிரபந்தம்) is a collection of 4,000 verses (Naalayira in Tamil means 'four thousand') composed before 8th century AD,[1] by the 12 Alvars, and was compiled in its present form by Nathamuni during the 9th – 10th centuries. The work is the beginning of the canonization of the 12 Vaishnava poet saints, and these hymns are still sung extensively even today. The works were lost before they were collected and organized in the form of an anthology by Nathamuni.

The Prabandha sings the praise of Narayana (or Vishnu) and his many forms. The Alvars sung these songs at various sacred shrines. These shrines are known as the Divya Desams.

In South India, especially in Tamil Nadu, the Divya Prabhandha is considered as equal to the Vedas, hence the epithet Dravida Veda.[citation needed] In many temples, Srirangam, for example, the chanting of the Divya Prabhandham forms a major part of the daily service. Prominent among the 4,000 verses are the 1,100+ verses known as the Thiru Vaaymozhi, composed by Nammalvar (Kaaril Maaran Sadagopan) of Thiruk Kurugoor.

The Tiruvaymoli ("words of the sacred mouth") is one of the Divya Prabandha, an important liturgical compilation of the Tamil Alvar Bhaktas, collected in the 9th century by Nammalvar. The author self-identifies as a lovelorn Gopi pining for Krishna.

These once thought of being lost were collected and organized in the form of an anthology by Nathamuni.

Nathamuni was born in Veera Naarayanapuram (Veeranam) or present day Kaattu Mannaar Koil. There is a lot of gap in time between Thirumangai Alvar(the last alvar) and Nathamuni. In this dark period, nobody knew what happened to the 4000 verses.

Legend has it that once Nathamuni heard some people reciting the decad of 'Aaraavamude' of Nammaazhvaar at Kumbakonam. Captivated by these paasurams,he wanted to know more about them. One of the verses also mentioned 'aayiraththul ippaththu' (Tamil: these 10 out of the 1000). When Nathamuni enquired about the remaining 990, the people who sang the 10 did not know anything about the other verses. But as the song mentioned the name and place of the alvar (kurugoor satakopan), Nathamuni proceeded to Thirukurugoor and asked the people there about Swami Nammazhwar's 1000 verses.[2]

The people did not know the 1000 that Nathamuni wanted, but they told him about 11 pasurams of Madhurakavi Alvar, who was the disciple of Nammaazhvaar (Kanninun Siruthaambu. They asked him to go to Thiruppuliaazhwar, the place were Nammaazhvaar lived, and recite these 11 pasurams for 12000 times. Nathamuni did as advised, and pleased with his penance, Nammaazhvaar granted him not only his 1000 pasurams, but the entire 4000 parsurams of all the alvars.[3]

The following table shows the details of the 4000 pasurams.[4] 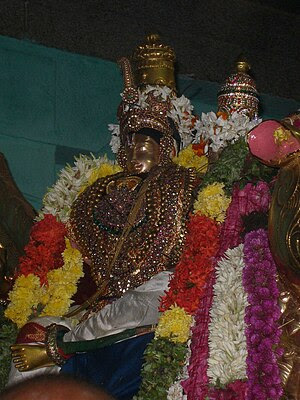