An autobiograhy of a middle class man - chapter 10

While, for thousands of people she is fondly known as "Mrs YGP," I had the privilege of calling her as "Manni" (elder brother's wife) and she used to call me with lot of affection "ennada Hari." Even though my close association with her for a short period of four to five years, there are lot of things I learned from her. Meticulous planning was the most important thing in my life. 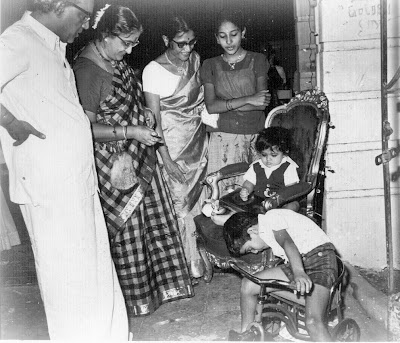 Mrs and Mrs. YGP on my son's ( the child who is in the chair) first birthday
We used to go to their house quite often for discussion on planning and execution of various programmes which are of different nature. We will be offered always to eat something according to the time, we are there, and coffee and tea will flow in unlimited quantity, irrespective of the number we are in.

She used to take lot of liberties with us and used to encourage at our adventures. Whenever there is no drama, they both will come to our programmes without fail. They used to contribute lot of suggestions before the programme and after the programme, without any reservation, offer their comments, if there was any lacuna in our perfection, so that we do not commit such mistakes again.

Normally, they were very happy with our organising skills, and making even an ordinary drama a great occassion for the troupes as well as audience. If they think of something new, they used to call us and suggest that we should do such programmes. They gave us lot of contacts for the success of our programmes, and wherever necessary Annaa or Manni themselves will talk to the concerned artists and will instruct them to extend their fullest cooperation to us. We used to advertise as " Apsaras, not a sabha, but an experience". They both will quote this after all the programmes " Dei, you justified your advertisement."

Many executives of other Sabhas, used to envy at the intimacy they were maintaining with us and used to blame them ," Why you are always giving good ideas to Apsaras?". There are many high profile artists and people contributed a lot, for our success and to be in the top: but the role played by Mrs & Mr. YGP's was exceptional with a personal touch in it.

I was honoured when they both came to bless my son on his first birthday, and it is always in the corner of my heart, that "Manni's" blessing to him, at that age, is one of the reasons for his brilliant academic carrier.

Her contributions to the academic pride of Madras ( Chennai) city is incomparable. Starting with few students and growing as a great banyan tree with such a standard and reputation, PSBB is an example of her dedication to education. Please read this link to know more about her.

I was inspired to write about her and remembered her when I saw the news that she has been honoured with an award of The Achievement medal for leadership and commitment to excellence in education presented in Cambridge, Massachusetes by the Centre of Excellence in Education.

I regret that the Governement of India has not recognised the noble services she is rendering, which is no way inferior to Mother Theresa's services, by honouring her with highest award of the nation. Will the authorities wake up?
Posted by hvaidya at 2:24 PM No comments: