Do you think only London and Paris have Wax Museums........
Look at this Amazing statues capturing village life in India ... Beat this!!
Location -Siddhagiri Museum , Kolhapur… it's on the outskirts of Kolhapur (Maharashtra), on the way to Belgaum
..worth a watch….all statues are made out of wax.

Laugh: It is good for health 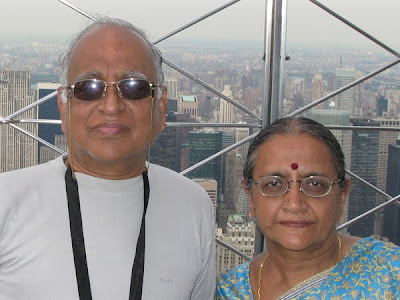 Last night my wife and I were sitting in the living room, talking about life... In-between, we talked about the
idea of living or dying.

I said to her:

'Dear, never let me live in a vegetative state, totally dependent on machines and liquids from a bottle.
If you see me in that state I want you to disconnect all the contraptions that are keeping me alive, I'd much rather die'.

Varadarajan.R said...
extremely funny and true to some extent, this really happened or was it a forward sir ?
July 5, 2010 1:49 PM

Saras said...
OMG! You got me into splits. Your wife has given you a hint how much she misses your company due to your addiction to these gadgets.Lol
July 8, 2010 1:44 PM

Harisankar said...
i say your let mami also see the good side of gadgets. i taught mum email, computers etc etc. the immediate effect was she was sending me smilies and chatting + my brothers profile came up in tamilmatrimony website. har..har..har hes married now. jeeeez. talk about picking up technology and changing lives. last month mum asked me what cloud computing was!!!!!!!!!!!!!!!!!! let mami also into the action and you might die of no attention heheheehehe
July 16, 2010 10:24 PM

hvaidya said...
My dear friend, Mami is always with her PC seeing all the serials from all the channels and even download movies and see at her convenience. I will have to move her from the chair for my lunch, evening coffee and she also blogs.
July 17, 2010 2:58 PM

going back in Time machine

As I was seeing Wimbledon 2010 woman's final, my thoughts went back to some of the great players of past, who were very good players as well as beautiful.  These photos will bring back sweet memories to many like me and will make youngsters sigh heavily.

Anna Kournikova has never won a single grand slam in her entire career; still the Russian beauty is famous as any of her counter parts. If you are a passionate tennis fan, Anna won’t be anywhere near your list of favourite players, but there are millions who adore her for her glam quotient. But unlike Anna, the world of tennis has other players who are blessed with talent and looks at the same time. Who’s your #1?

What’s unique about Argentine beauty Gabriela Sabatini? Her brunette hair or appealing smile? She took the world by storm when she beat the then world # 1 Steffi Graf in the finals of the 1990 US Open. That was the only Grand Slam crown she’s ever won in her career, but managed to grab a slew of endorsements. Gaby even has her own line of perfume!

There is no match for Steffi when it comes to grace and genius. She was the true queen of tennis who never got carried away by any distractions. The game always remained her top priority; still the leggy German blonde was hailed for her amazing figure, too.

On popular demand, I’m adding Monica Seles too to the list. Seles was my favourite player! With her pixie hairdo and smile, Monica posed a big challenge to Steffi Graf. At 16, she won the French Open, becoming the youngest ever to win the title. She went on to win 8 Grand Slams in her teens, but her career came to a halt when she got stabbed by a ‘crazy’ fan of Steffi Graf – Gunter Parche. Though her wound wasn’t fatal, it affected her mentally and Seles became a shadow of her old self. However, she made a great comeback winning the Australian Open in 1996.

Tennis’s original glam girl Chris Evert is often regarded the diva of ’70s. Coupled with brilliance and talent, she has to her credit 18 Grand Slams altogether. Her haircut was immensely copied by women around the world then.

Sexy, graceful and suave…French lady Mary Pierce had it all! Remember her ‘French braids’? She can also be regarded as a trend-setter. Mary was popular among non-tennis fans too. Back then in the ’90s, photographers never used to miss a chance to get a perfect ‘Mary Pierce’ shot!

Anna’s name is synonymous with glamour. She was only 16 when she reached the Wimbledon semi-finals in 1997, and took the world by storm with her sex-appeal. She never made it beyond that, but her career took a different course and she got approached by fashion magazines and agencies. Anna has officially retired from tennis but still plays charity matches.

What Anna lacked, Martina Hingis had. Hingis won several Grand Slams in her teens, but recurring injuries cut short her career. Hingis had great charm and a captivating smile!

Photos contributed by Mr. P. Ananthanarayanan . He sent many more but I selected few of my favourites.

BHASKARAN said...
Thank you so much for posting my all time favourite Gabriela Sabatini, but you have missed out Maria Sherapova
July 4, 2010 5:49 PM

Harisankar said...
really beautiful. nice thought of a time machine. if i get a time machine i would go back in time watching all these gamers all the way to the court of the sammothiri where vas co de gama came. put a bullet through both of them and come back to see the difference.
May 6, 2011 11:01 PM

Labels: going back in Time Machine