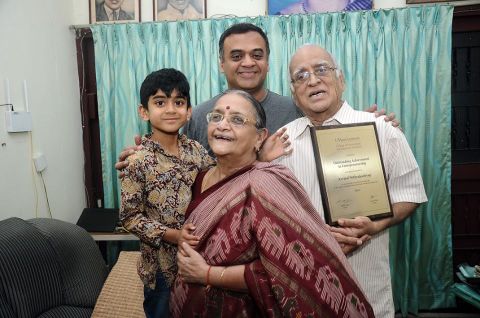 Today, I have completed 78 years of life. Which, I think, is considerably long. When I had to go for a heart surgery exactly at the age of 50, I thought, another 10 or 15 years of life is left for me. That is what, even many heart surgeons hope. Thanks to Dr. Jinadas I lived 25 years more after the surgery to get the heart attack again. By the time, I became an expert to know how to reach the hospital in time, to extend my life. That is how I reached the hospital in time on July 2017, to survive with a stent inserted in the heart, which normally guarantees another five years subject to all other parameters being under control.
I had many ambitions in life. Few of them I could achieve. Many of them, I miserably failed. I have no regret in my life, because I always thought, nothing is impossible, Even if death comes to me in the next minute, I will die happily.
I wanted to die with my head on Arvind’s lap, as my mother did on my lap. If I happened to be in a hospital at that time, I want to hold his hand and die. But, it appears, that I am destined to do this with Prema.
Upto a particular stage, we claim that I am so and so’s son and then claim I am so and so and end with saying so and so’s father. I started claiming to introduce my self as Arvind’s father for the past 15 or 16 years, because I finally realized, that I have nothing to claim proudly, except, this one aspect.
In thirukkural it is said “ It is a father’s duty to make his son to be in the top of the society.” And in turn he says.” It is the duty of the son to make his father be praised by society, as what a penance his father has done to have a son like this”
I am not able to claim that I did justice to the first one, except I gave my genes to him. But Arvind has proved the second one.
Hence, I welcome my next year, with a feeling that one more day nearer to the death and live happily, that, in all his achievements Arvind has got, and to get in years to
come , one of the best what he gave me was Arish.
Even though I am matured enough to welcome death, I am greedy to live for some more time for Arish to understand my death and be matured enough to take it in the stride. He has already proved that he is capable to face things like that by his feelings and expressions about Sendhil.
Posted by hvaidya at 6:01 PM No comments: 
..that love is the center and the core of everything,
and that Self is the place where all love must begin.

You cannot show another a part of you that you
cannot show yourself. Therefore, begin where all
growth, where all evolution, where all love must begin:
with the person in the mirror.

Will you not love yourself grandly today? For the
world's sake?

Posted by hvaidya at 8:54 AM No comments: