An event of such magnitude never seen in the world 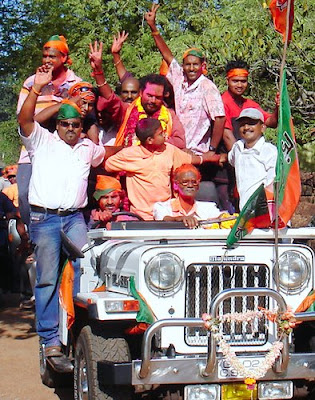 It is very easy to relax in the Sofa, watching TV with something to crunch and blame everything and everybody. But read this whether you voted or not, to know what type of exercise, we have undergone.

First of all, I would like to mention that, like the previous elections, India's election is not just an electoral exercise, but an event of such a magnitude that will never be seen in the world.

We have a large electorate, 714 million voters; we have more than 8 lakh (800,000) polling booths, each polling booth has a team. We have constituted another interesting institution called the booth level officer -- about 8.28 lakh people.

The idea is, in your own locality, somebody known to you is there all the time, round the year. So, if you have any problem, any query, whether your name is on the roll or not, you can go to him or her. And we have also asked political parties to appoint booth level assistants.

We deploy about 7 million to 8 million people to run the election including the security forces. They are trained at various levels. Each booth has to have a mode of communication so that we get to know within 10 minutes if anything goes wrong. This is something we tried for the first time in 2009.

We developed a very unique programme called COMET, which is communication for election tracking. This was used for the first time here. The idea was that we should be able to communicate with every presiding officer of every polling booth.

We knew the landline or the mobile number in the village. If that was not there, wireless sets of the police, satellite telephones or if nothing else, a runner to go to the nearest telephone, and tell us if anything goes wrong. This arrangement works as a great deterrent.

Secondly, this time we tried vulnerability mapping. In lots of areas, weaker sections were not allowed to vote, they used to be intimidated. There is domination by criminals. We made sure that there was no intimidation. We identified 90,000 such polling stations which were vulnerable where we took preventive action against 373,000 people. We rounded them and booked them. We told them that we know you and if you misbehave, we know where you are. These were great deterrents.

This election was particularly important because of the Naxal problem. The Maoist problem has increased over the years and about 118,000 polling stations in 79 parliamentary constituencies were in Naxal-affected areas.

So we worked on a three pronged strategy to deal with that. First we decided that we will hold the election in the first phase itself.

The logic was that in the first phase we will be able to give our security forces three to four weeks in advance to go there, understand the area, dominate the area and conduct the elections. Because, in the subsequent phase the time available for the forces to move from one place to another is much less (2/3 days) and that is not enough.

Secondly, we make sure that elections were simultaneous in all Naxal-affected states, because the Naxals would not be able to cross over from one state to another and create trouble.

Thirdly, our polling time in these areas was 7 am to 3 pm so that the polling parties could return in daylight itself to safer areas and be evacuated by helicopter.

So broadly, this was the magnitude. I just don't think that these arrangements failed when the serial blasts occurred. How many blasts occurred to compared to normal times? As you know, the Naxals have been attacking even the police headquarters.

In the entire five-phase election, there were about 30 deaths. Unfortunate they were, but in view of the magnitude of the problem, this is a small price we have to pay.

Hats off to our security forces, our polling personnel, who discharged their duties in the most difficult situations. Every state has its own set of problems. I mention the Naxalites , which affects about 17 states.

States like Uttar Pradesh and Bihar have different kind of problems. Some states have money power, the use of black money in elections is very high.

Then in Jammu and Kashmir there is the threat of militants and separatism.

So every state has its own set of problems which we identify and deal with accordingly. I think our strategy and our performance is for everybody to see.

There is only one case which became debatable. A state director general of police was indulging in loose talk. That was because his understanding of the field conditions was very poor. He has never been posted in the field.

The deployment of forces was done in consultation with the home ministry, the director generals of all the central police organisations, the state DGP and superintendents of police.

Actually, it is the SPs at the grassroots level who made the deployment plan in consultation with us and our observers. We sent about 2,100 observers. They are all senior officers. So the neutrality of these observers is the biggest guarantee. People have faith in it.

The violation of the election code is not as bad as it used to be earlier. You should understand that the model code is a creation of political parties themselves, it is not a law. And we find that in many cases, it is more effective than the law.

In the law what happens is that if you violate the law, we'll file an FIR (First Information Report) with the police. That means the ball is out of our hand and the police officers may someday, in a few months, conduct an inquiry or may not. Then he will put up a challan in court. It will take years, 10 or 20 to 30 years.

Whereas in the model code violation case, we write to the senior officer, the chief minister or even the prime minister for that matter. If there is a violation, we write to them. And we request that if you have violated the code, please reply within 24 hours. And the reply comes.

No senior politician wants to violate the model code, and the very fact that a notice has been issued is a great deterrent.

There are two kinds of expenditure. One is the money which you spend on hiring vehicles, postures, banners and flags, and media space.

Our expenditure observers are able to take expenditure statements from the candidate. They have to file these in the course of the campaign. Our observers monitor whether there is an understatement. That much we have been able to control effectively.

But if it is the black money, we cannot track transactions. But there are hundreds of model conduct teams roaming around to see if any violation takes place. For instance, in Karnataka, we seized Rs 29 crore (Rs 290 million).

Thirdly, when you say that model code is violated blatantly, we know for sure that violations are much fewer this year, but the visibility has increased because of the media explosion.

I don't think it was overall low voting. It was 50 to 60 percent. But the fact that people have started talking about percentages is a new thing. We have seen that in urban areas like Mumbai , Delhi Allahabad, the turnout used to be low. The so-called educated people will sit in their drawing room and criticise the government and politicians, and that is totally wrong. Because if you do not participate in democracy, you have no business to criticise.

Our budget is just Rs 20 crore (Rs 200 million). We are a very small organisation conducting one of the biggest exercises in the world. We are just 300 people in the Election Commission. That's all. It's remarkable.

In every state, we have a Chief Electoral Officer supported by eight to ten people. That's all we have. But for the election, we can call on anybody. That is how 7 to 8 million people are deployed.

Money is not the problem. For India, the democratic exercise is very important. The election system is 100 percent free, fair and democratic, and we have no doubt about it.

The only complaint that we have been receiving was that some names were not found in the electoral rolls. That may be due to several reasons. One, it may be computer error, or maybe some inefficiency. After all, 7 million people were not regular members of our team. So some of them maybe just lazy, they may be inefficient, or they may be deliberate mistakes.

Sometimes we get complaints that the whole chunk of the population, which is considered hostile, have been struck off. Then we conduct inquiries.

We are proud to say that Bharat Electronics Ltd and Electronic Corporation of India Ltd, both government undertakings, manufacture the EVM machines under our guidance and that of a technical committee headed by a professor of IIT, Madras.

This committee of experts has been constituted by Parliament. We are very happy that they oversee any innovation. The EVM is a cheap machine; it costs about Rs 8,000 to Rs 10,000.

The machine has two units, one is a central processing unit, and the other is a variant of one control unit and ballot unit. So, the control unit has all the data.

One CU can handle 16 candidates. So if the number of candidates is more than 16, then we need two machines. If there are 33, then three machines, up to 64 candidates, four machines this can handle. Beyond that, we have to go for old style ballot paper.

I will tell you an interesting story. We are very sensitive. In the last phase polling, we spent 3, 4 days on just two polling stations in Kashmir, and in Ladakh, which were at the altitude of 13,000 feet, and where our air force helicopters made several attempts to land, but could not.

So we dispatched six people in two parties by foot, in knee deep snow, for 40 km. They walked for two days and two nights and then conducted the poll. They had taken along with them satellite phones. There were just 37 voters. They were as important to us as anybody.

We made a special arrangement for counting too because our officers could not come back because of the snowfall.

We authorised one of the two senior officers and declared him an ARO (Assistant Returning Officer) legally. He counted the votes and conveyed it through the satellite phone. That result was announced first before the rest of the counting began.

Our AVMs are stand alone machines; it does not communicate with anyone outside. The innocence of this stand alone machine will be lost if there is a remote control. There were just repolls in 660 booths out of 838,000 booths. We are proud of what we have done.

We have the satisfaction and sheer pride in doing such a great job. Three days ago, we received an e-mail from a teacher in Jamnagar, Gujarat. He said he was so touched by the whole election process, he wrote, "I don't want my remuneration; tell me where to return it."

I feel proud to be an election commissioner. It's a great satisfaction to strengthen Indian democracy. That makes us proud as Indians. 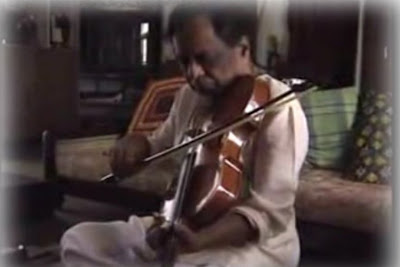 Posted by hvaidya at 6:21 PM No comments: