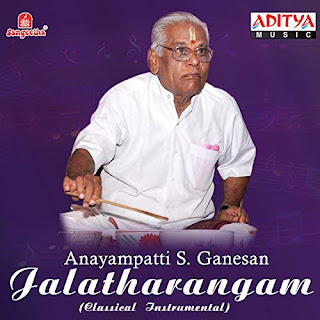 To play any music in a cup of water is as difficult as space landing. But for Aanayampatti Ganesan, who is synonymous with jalatarangam, it is as simple as walking. His ancestors were jalatarangam players and he probably inherited their expertise.

His musical odyssey started at a young age when he started learning vocal from the renowned Chembai Vaidyanatha Bhagavathar. Not stopping with this, he also learnt violin from his uncle Narayana Iyer. His father K Subba Iyer was the Asthana Vidwan of the erstwhile Mysore State.

It is only providence which intervened and made him shift to this stream (water). The sage of Kanchi, the Paramacharya, asked him to play jalatarangam as this was his family instrument. Thus he started playing "bowls of water from 1984". In fact, it was in musicologist B M Sundaram's house he first played the family heirloom. Since he was well-versed in vocal and violin playing, the instrument was not very difficult to play.

From then on there was no looking back. He tailors his music to keep the audience engrossed.

The cups are made of poreclain and are imported from China, Japan, Germany, and Indonesia. He has about 20-21 cups which are filled with water. The size of the cups will vary according to the sapthaswaras. The cups will be arranged in a semi-circle while playing.

How does he play the containers of water? With two sharp bamboo sticks, he is able to caress the audience with water. Since the density of water varies from place to place, the sruthi will be set in accordance with the water level. Ganesan declares that since the scope of the instrument is limited, only some ragas can be handled.

He is an 'A' grade artiste in jalatharangam and staff artiste of AIR Pondicherry. Many stalwarts have accompanied him. He has been decorated with a slew of awards including the prestigious Kalaimamani from the Tamil Nadu government.

He created waves with water at 'cite de la Musique' in Paris, France, in 2006. He is a widely travelled performer and has unfolded new dimensions in this watery instrument.

A genius, he has brought a new meaning to jalatarangam. His musical acumen is reflected in the production of 72 Mela Kartha talas along with ghatam maestro K M Vaidhyanathan, mridanga vidwan Thinniyam Krishnan, Mylatoor Ramachandaran and musicologist B M Sundaram.

His son Venkata Subramaniam is a violinist.

Ganesan has brought out the magic of music in jalatarangam and has proved that music can be brought out of any medium.