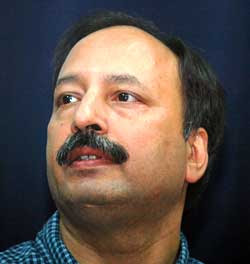 There is a convention that we should not say anything bad about those who passed away. But, I like to break that convention, because the next generation should not be misguided and the history should not be wrong. May be, "Mr. Karkare was an efficient officer, and always in the frontline". This is waht all the media, either electronic or Print are telling.

But see his actions.

1. He gets the news that some terrorists have entered Bombay and firing at CST Railway station. ( He has no clue, what is this attack, how many people have come, what is their motive etc. Mind you he is chief of ATS meaning Anti Terror Squad.).

2. After visiting CST, he goes in the car in search of the terrorists. He never bothered to split another two efficient officers, but takes them also along with him with other police personnel, in a single vehicle.

4. Knowing pretty well that the terrorists are using AK 47 indiscriminately, they never bothered to find out where they are, what is their mode of operation etc. but having a jolly ride in a car, ( once again this car does not have bullet proof cover) and pathetically shot by the terrorists.

5. He had one Mr. Ansari who was arrested in Lucknow, and send him back to Lucknow prison, and it is being quoted by many leading dailies that this Mr. Ansari is the person who prepared the map for these terrorists.

7. After all he was also an officer, who was dictated by bosses like Sonia Gandhi, what to do, and he was obliging, ignoring his duties.

The pity is that the death alone saved him and made him a hero. Had he been alive, imagine what the media and public would have told and talked about him !