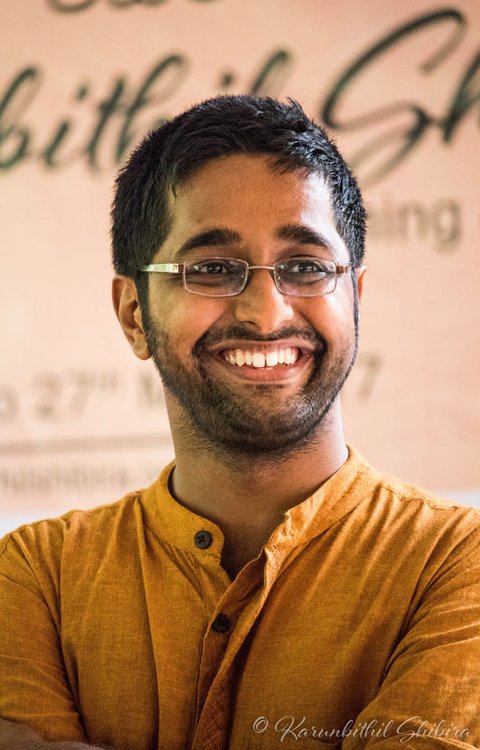 ..that rushing around to fix everything, or to "get ready,"
is not going to do you more good.

Move resolutely, but don't rush. There's a difference.
Rushing removes resolution, often replacing it with
panic or irrationality or, at best, not well thought-out
choices.

So keep moving. Don't stop. But don't rush. Don't
race around. Sure and steady gets you there every
time.

1. How to bring down TM Krishna's gimmicks ?
We need to form ATMK (anti-TM Krishna) faction. This team (say 10 people) has to go all his concerts and sit in the 4th or 5th row, so that TMK can see them. After he finishes the first kriti, all of them have to get up and exit. If TMK asks why they are leaving, the reply- " you start singing properly then only we will sit for the full concert".

2 – How to leave TMK’s concert in between ?Very simple, middle of the concert, while singing rAga, TMK will go to sleep. This is the time to get out

3. What is the while colour box, he is keeping in front of him ?Apart from hiding his library of books from rasikas, he creates pallavi for his RTP and also get online instruction from Trichy sankaran on the topic Inventions/Discoveries in music.

5. Will he ever get sangeetha kalAnidhi –( Question of a die-hard fan of TMK )Reply from ATMK- He will never get. SK is given only for those who start the concert with varNam and ends with Mangalam..

6. For invention/discoveries, Government gets Bharat ratna. Why can’t TMK get this because he has invented so many? Reply by ATMK- President refused because he informed that he will sing “English pallavi”- “you are beautiful, I have never seen a babe like you in my life” in the ceremony hall, before receiving the award. He refused to take the award without singing his “own” pallavi.

7. Why he slapped “Ghatam vidwan” in yesterday’s concert of TMK ?He started the slowest kriti ‘Ososi” and sang for 1 hour and 30 minutes. Mridangam was just tapping and no job for Ghatam vidwan at all. So he went home to see sun TV serial for half an hour and returned. So, he was slapped.

8. Why Mridanga vidwan cried in yesterday’s concert ?TMK started concert with “pavamAna” in madhyamavathi and immediately asked Tani to start.
Mridanga vidwan could not even align his sruti and he was still struggling to adjust the mike. Without knowing what to do, he cried.

9. Why Karaikkudi Mani gets more claps than TMK when both perform together ATMK member – arE Bhai !!!! very simple, rasikas can understand what KM is playing !!!

10. Why Akkarai is always accompanying ?Because she is the only rasikas who is showing akkaRai (அக்கறை ) in his concert.

11. Why Dhanush was very happy after attending TMK’s concert ?He understood the meaning of the word “kolai veRi di”

12. Why did TMK drink hot water every 10 minutes in his recent MA concert ?Because he could not "digest" his own "rendering of kritis"

This was the mail I received from one of my friends. I do not know who wrote it. However, I feel if it is written by a person who claims himself a carnatic music rasika.  I wonder how after hearing carnatic music he can be so perverted, arrogant and hate individuals like this. I do not think any body who sincerely hears our music can have so much hatred about an artist and about an individual. I am a believer that our music converts individuals to sophistication. I feel miserably sorry for this person for hearing our music and still to be like this.

Whether this gentleman accepts him as an artist or not there are thousands around the world have accepted him as one of the best artists and he has given about 11 concerts in one month during this season. The gentleman who wants to go with few friends and occupy within four or five rows to get out after first song does not know he cannot get seats within five rows in his concerts, unless he is prepared to pay through his nose. All the shows were house full shows, and in his concert at sri Parthasarathyswami Sabha when he asked the audience whether he can sing up to 9.30 P.M ( concert started at 6.30.P.M) there were shouts from the audience requesting him to sing up to 10.00 P.M. He sang up to 9.45 P.M and the crowd was in tact until the end of programme.

As far as the 2nd point is concerned it is very cheap statement not worthy of answering.

"Snageetha Kalanidhi is given only to those who starts from Varnam and ending with Mangalam and so T. M. Krishna will not get it" Perhaps this gentleman is still in 19th century. Many artists, seniors as well as Juniors starting the concerts without regular Varnam now a days. Music Academy will learn this trend in few years. And what is wrong if the concert is not started with Varnam? Out of so many Varnams available, from Ariyakkudi to Amrutha Murali, were singing the same varnams in all the concerts which can be counted within your fingers. They never tried new varnams except few to be mentioned like "Valachi" or "Viribhoni" or "Intha" "nere nammithi" etc. Many rasikas are really bored with these repetitions and Krishna really brought a change and relief. And the Varnam was considered as warm up for a concert. If an artist can be warmed up from the very first song(krithi) without Varnam what is wrong in it.?

And the statement regarding Bharath rathna is so silly and shows to what extent people can stoop.

The statement about Karaikudi Mani and Akkarai is also of very low taste and they will not accompany if Krishna is not an artist of good standard.

These comments only shows to what extent people can stoop to write about an artist who is recognised and appreciated by thousands of rasikas all over the world and in demand with almost all Sabhas in Chennai and everywhere in the world.

If this team does not attend his concerts fully, Mr. Krishna is not the loser. I do not understand how the moderators of "Rasikas.org" allowed this to appear in their forum. Shame on their part.

In the concert at Brahma Gana sabha on 8th December 2011 one Young mridhangist by name Praveen Kumar accompanied T.M. Krishna. Before the main item was rendered where the "Thani " will be played. Mr. Krishna requested the audience after introducing the young artist "not to move when "Thani" starts to encourage the young man. The audience obliged. How many Artists has got this gesture and benevelence?

In the concert at Sri Parthasarathyswami sabha when Manoj Siva was to start his "Thani" people started moving and Mr.Krishna requested to stop the "Thani" until all those indecent people leave the hall. How many got the guts and courage to do so?

It is Mr. Krishna who constantly insisted and trained people not to move when Mangalam is sung. His experiments may not be liked by many. They do not attend his concerts. But there are thousand who throng the halls in all his concerts and this Anti TMK group cannot stop Krishna to go up in the ladder. If his music is not good, does this elite team calls, all those who are attending his concerts are idiots and they do not know the music. This appears to have come out of some sort of Jealousy of his popularity not only with senior audience but also with lot of youngsters.


Shocked to read this. I think you have very aptly concluded "This appears to have come out of some sort of Jealousy of his popularity not only with senior audience but also with lot of youngsters." கழுதைக்கு தெரியுமா கற்பூர வாசனை. Ideally we should ignore these kind of people who knew nothing about music and should not give importance to them.
January 3, 2012 7:05 AM


I feel sad to see the emrgence of carnatic music nastiga. No body can belittle any one except himself. so this type of formation of sentences and using various artists name are objectionable. Can the person who commented badly on T M Krishna gather half an or 10% rasiga to be with him or even willing to hear these words. If you don't like decency is keep off. Krishna's service to music is unknown to you. It does n't deserve more reply than this. I feel sad why this was sent to many --should have been scraped in the beginning itself
January 3, 2012 11:08 AM

I enjoy reading your blog and was surprised you had written something like this.

maybe you should put your comments in the front and the garbage in the bottom so we know that we are reading some rehashed stuff.


i completely agree with you Sir; i was recently in Chennai and attended 4 of his concerts (over 8 days) and all the shows were full (even on the day it rained heavily - Thursday - he was willing to sing even if only 10 people were present - though in fact the hall was nearly full). He encourages youngsters and his coartistes.
January 3, 2012 7:04 PM

Bravo sir! TMK is an artiste who is constantly trying to push the boundaries of the art. Without people like him (and a few others), the art will stagnate and eventually die off. I mean, is this concert format so sacrosanct that no one can "dare" question this? Varnam-Fast Kriti-Pantuvarali-Another Fast Kriti-Big Kriti-Yet Another Fast Kriti-Pallavi-Slokam-Thiruppavai / Thiruppugazh-Javali-Thillana-Pavamana!!!

I appreciate TMK for exploring compositional forms other than the kriti; I appreciate Sanjay for singing 3 different pallavis in the same raga to get Tala flavours.

As with all experiments, some are bound to fail. It should not kill the experimentation process itself.
January 9, 2012 5:25 PM

Sridhar said...
With due respects to the emotions and opinions written in this blog, I wish to add that i am a fan of TML as well but to my surprise on the 4 hours concert at Rani Seethai hall on the 8th Jan 2012, TMK instead of raga alaph, choose to do Thanam for Nattai followed by Violin (RK Shriramkumar) sang the pancharatnakriti on Nattai (Jagadanandakaraka)

Then in the RTP, After the alaph in Sankarabaranam, he did not sing Thanam but sang pallavi.

It took sometime to realise this arrangement as i was conditioned with the regular pattern but still enjoyed.

Ramakrishnan said...
suggested experiments in future concerts:
1. start with saurashtra thaanam followed by pavamaana suthudu...
sing swaras and start charanam from sriganapathini...attach thani for this....totally one hour.
2.sankarabharanam alapana followed by ramachnadram rajeevaksham note swara by dikshitar.
3.rtp starting with thodi alapana,mixed with behag thaanam and followed by vara naradha of thyagaraja --- here anupallavi from giri pai will be mixed with this song, charanam from ramanukku man mudi tharithaale will also be mixed up. in the end there will be thani between violin and morsing. gatam and mridangam will be watcching.....
4.jana gana mana with a kambhodi alapana and sung in madhyamavathi.
two of his students will render this song along with him, each singing in turns for 5 minutes. so that it looks like perfect film music.
5.concert ends with vinayaka song comprising pallavi from ganarajena in arabhi, anupallavi from gajavadhana in sri ranjani and charanam from a bhajan in tillang prabho ganapathey. if u can have raga maalika , who said there cannot be a paattu maalika?? i will do every possible mix up.
when everry one is leaving, call back all and ask permission, shall i sing till next week and continue with pantuvarali alapana, thodi alapana, purvi kalyani alapana, ranjani alapana and mix it with "why this kolaveri di " as pallavi and its tamil version" yen indha kolaveri di?" in dharmavathi and simmendra madhyamam............
his concert continues but half the crowd has already died of heart attck. i am one of them....
January 14, 2012 2:06 PM